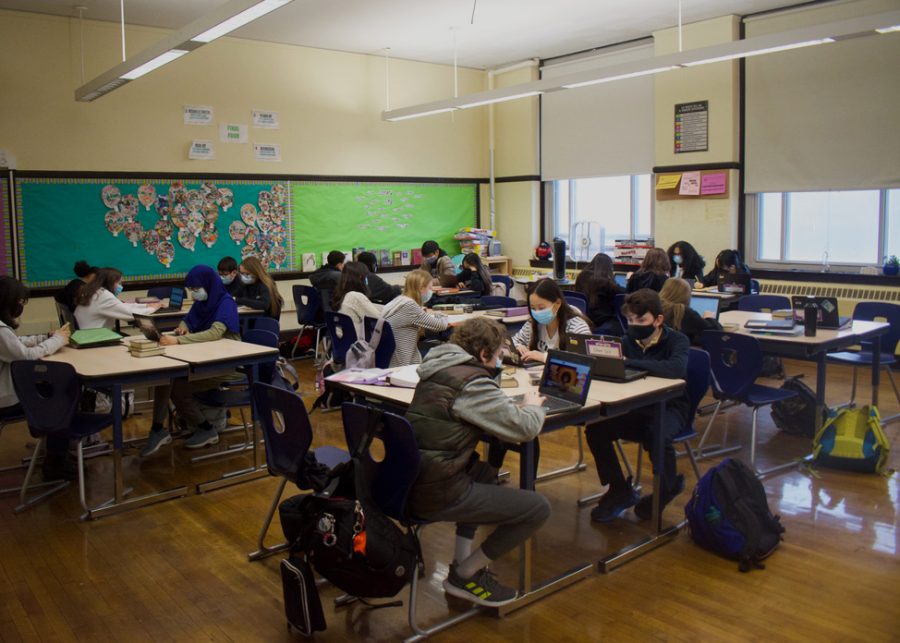 Silence the Rumors, Support Our Sixies

By Azalea Thompson (I) and Darren Seto (II)

Amid the circulation of controversial rumors, Boston Latin School administration continues to introduce programs to support students through the challenges of an in-person year.

These unique circumstances pose obstacles for students new to the school building. Ben Blanchard (VI) notes, “It is challenging to adjust to the BLS bell schedule. My schedule in elementary school and now are different. There is more homework, and commuting to school takes longer.”

BLS guidance counselor Ms. Andrea Encarnacao remarks, “We did a lot of coaching this fall with both Class VI and V students. Taking notes and learning to prioritize are skills we talked about in our conversations with many of our new students and Class V students.”

Despite the abundance of support and resources for students, misinformation regarding Class VI students has recently circulated around the student body through social media and by word of mouth. The conversations it has sparked, however, do not accurately reflect the new class and their experiences.

“Anyone can make a list. The claims that were made are false,” says Head of School Rachel Skerritt.

One claim is that a large number of Class VI students are currently failing their classes. BLS administrators, however, say that this is not the case. “There are a lot of claims of numbers of students who are slated not to pass or who are in academic jeopardy that are untrue,” Skerritt adds.

For students in need of academic support, existing programs such as after-school tutoring and Saturday Success School remain available. The challenges caused by the ongoing pandemic and the resulting months of remote learning have, however, prompted BLS administration to introduce new programs — to specifically help the school’s youngest students.

In November 2021, BLS implemented a new after-school program in response to the pandemic — Wolfpack Afterschool. The program, led by the director of BLS McCarthy Institute for Transition and Support, Ms. Rose Delorme-Metayer, gives Class VI students the opportunity to complete their homework under supervision before going home. The program begins with an enrichment block, where students participate in activities such as board games and drumming, before completing their homework.

This year, some other non-academic programs continue to support Class VI socially. Peer mentoring, a long-established program, pairs a group of seventh graders with an upperclassman, setting the stage for inter-grade bonding and advice.

“Talking to other students from the peer mentoring [program] gives me the chance to see what options and pathways I can pursue at BLS, such as what classes I should consider in the future,” says Blanchard.

In response to changes brought on by the pandemic, Boston Public Schools also distributed Chromebooks to students across the district to facilitate remote learning in 2020 and support classroom instruction through electronics.

Unlike previous years of in-person learning, students are expected to have a device readily available in class this year. School-issued Chromebooks come with the Google Suite messaging app Google Chat, which allows students to communicate instantly in a way similar to texting, even during class. The BLS administration, however, recently shut down Google Chat. This prompted students to speculate reasons for the sudden change, mixing the sensible with the outlandish.

Skerritt addresses the reasons for the administration’s decision, saying, “When we checked in with teachers, we found that no one was using [Google Chat] for instructional purposes, rather more [for an] immediate way for students to communicate […] which is very compromising to our instruction during the day. […] It’s not related to specific grade levels.”

Skerritt describes the unfounded claims as “upsetting not just to administrators, but also to the grade level these claims are about.” She adds, “We have to remember that, not only is it inappropriate and untrue, but that it has an impact on how students feel about their own classmates. […] We don’t want our youngest learners internalizing others’ beliefs about what they’re capable of. I worry that our seventh graders are going to be distracted in a way that they don’t understand how much we and BLS administrators think they can be successful.”

Echoing the Head of School’s sentiment, Ikra Abbasi (VI) shares how she feels about the school community’s attitude toward her class: “Some upperclassmen might think that […] we don’t deserve to be here. Around school, I hear upperclassmen talk about sixies and what we’ve done, and they associate that with every sixie. And that’s one of the main reasons it’s been hard for me to adapt to this environment. […] It’s not all of us.”

As the end of the school year nears, BLS administration hopes that students will come together as a whole. “No one has truly experienced and learned to pivot the effects of a pandemic in the modern education system. We are still learning to navigate this experiment,” remarks Associate Head of School Jonathan Mulhern.

Skerritt has a final message for all BLS students: “There has never been a sixie class at BLS where everyone had it figured out in sixie year. […] Many students at BLS were once in their shoes at some point, and it’s important we do not forget that.”

The Saturday Success School offers help to students in Classes VI to IV who are in need of more academic support in their classes. Students meet every Saturday virtually from 8:00 A.M. to 11:30 A.M. for three 45-minute sessions for three different subject areas. Teachers, alumni volunteers and upperclassmen tutor students one-on-one or in small groups. This allows students to develop their skills in the...

Strategies for Success workshops are monthly workshops in different skill areas. Workshops are Thursday afterschool in Room 135 from 2:30 P.M. to 3:30 P.M. Topics include note-taking in math and building strong relationships with teachers. Announcements for these workshops are put out on the Daily Bulletin, and any questions can be emailed to Ms. Rose Delorme-Metayer at [email protected]

After-school tutoring is a program where students support other students with homework assignments. Tutoring runs after school Monday to Thursday from 2:30 P.M. to 3:30 P.M. General tutoring is in Room 134, while specialized Latin tutoring is available in Room 135. Students who want a structured environment with one-on-one support to complete their homework will benefit from this program. No prior sign...

Wolfpack Afterschool is a program for Class VI students who would benefit from a structured environment for completing homework assignments. The program runs Monday through Thursday from 2:15 P.M. to 6:00 P.M. Activities include board games, karate and drumming. The homework block is staffed with teachers who will provide academic help, encouragement and support around prioritizing, focus and planni...