By Emily Sun and Aidan Chen 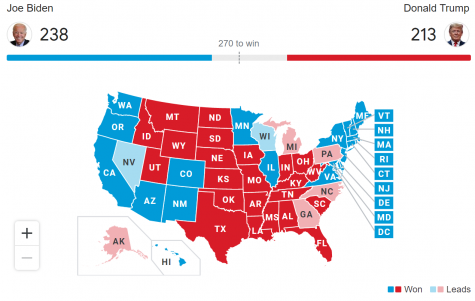 On Tuesday, November 3rd, 2020, Americans voted for the next President of the United States.

Confused about how the electoral college system works or what the parties represent? We have compiled a list of frequently asked questions and answers to keep you informed about the Presidential Election.

What is the Electoral College and Electoral Votes?

What is a swing state and why do they matter?

A swing state is a state within the United States where the Democratic and Republican parties have nearly identical levels of support. While most states have clearly defined political majorities, swing states are regarded as crucial for the Presidential Election because victories within these regions are unpredictable, and securing them would provide an advantage in Electoral Votes for the candidate’s campaign. Some examples of swing states for the 2020 Election include Florida, Michigan, Minnesota, Ohio, Texas, Wisconsin and more.

What are the Republican and Democratic Parties?

The Republican Party and Democratic Party are the two dominant political parties within the United States. A political party is a term for an organized group of people who share a similar ideology and work to elect candidates with similar views to accomplish their goals. While other political parties exist within the U.S., the Republican and Democratic Parties are the two largest and most influential ones. These two parties differ in opinion on a variety of topics, including philosophy, economic ideas, military issues and healthcare rights.

When will we know the results of the election?

This year’s Presidential Election is unique: the coronavirus pandemic has increased the use of mail-in ballots, different from in-person ballots which are filled out and submitted at a polling location. Because mail-in ballots take time to be sent in and counted, it might take more time than usual for election results to be determined officially. However, as more results emerge with each passing day, analysts can make predictions who will emerge victorious. Ultimately, the population will not know for certain until the U.S. Congress certifies the election results officially. During the last election cycle, this confirmation took place on January 6, 2017, while Election Day took place on November 8, 2016.

Why is November 3rd the designated date for Election Day?

The U.S. Congress sets the first Tuesday after the first Monday in November as the determined Election Day. This day takes place every two years, and always falls on an even year.

Do people only vote for the President on Election Day?