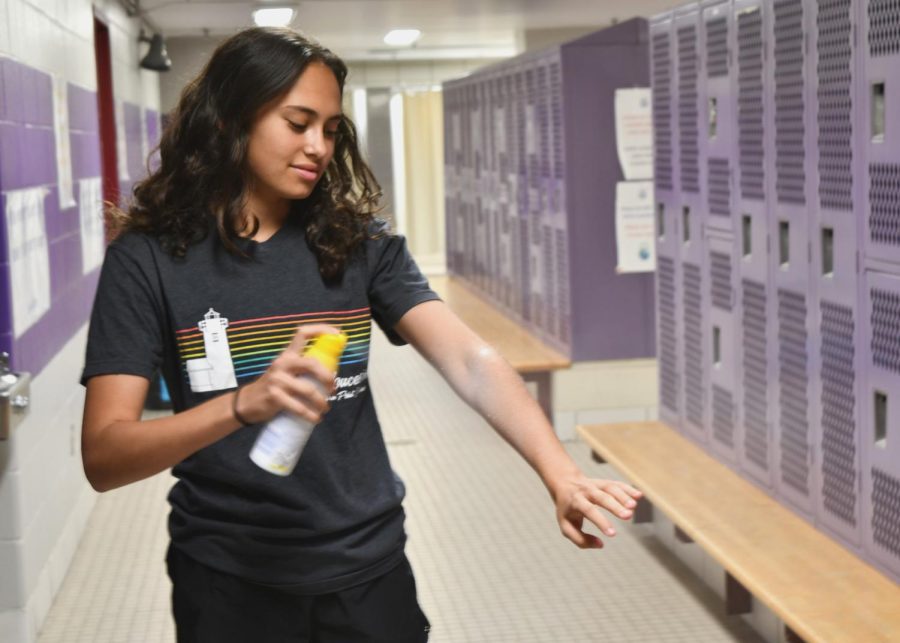 With spring in full swing and summer just around the corner, the weather is warming up and the sun is coming out. While spending more time outdoors, enjoying the warm weather and having fun, more people will be accidentally putting their skin’s health at risk under the sun.

Spending time in the sun brings exposure to ultraviolet radiation (UV). These UV rays from the sun cause damage to the skin over time, no matter the intensity of exposure. One of the best ways to avoid skin damage — which can lead to worse problems — is putting on sunscreen before going outside or doing an activity that requires you to be in the sun.

Boston Latin School science teacher Ms. Gina Castellanos-Ellsworth notes, “Every sunburn, no matter how minor, is skin damage. […] The damage you allow now will affect you later on — wear your sunscreen!” Choosing to skip sunscreen may seem inconsequential in the short term, but in the long run it can have serious consequences such as sunburn and skin cancer. Given these hidden risks, putting on sunscreen is an obvious choice to protect oneself.

A necessity like sunscreen should be easy to access; however, it is clearly overpriced. BLS varsity crew Coach Conor Fearon says, “I’ve definitely had to dispel misinformation with my athletes about the dangers of sun exposure [as many of them] don’t understand how much it makes a difference until they make the mistake of not wearing it.” If people aren’t aware of the importance of wearing sunscreen, then they’re less likely to spend money on something so expensive.

Although using sunscreen when it is sunny may seem like second nature, people don’t apply it for many different reasons. Some may simply forget, and others see it as a waste of time, but most people just don’t have ready-to-access sunscreen when they actually need it.

While many students arrive at school and do not have much sun exposure during the day indoors, when it comes time to leave for home or to attend an after-school activity like sports, they will be in the sun. When leaving school in the afternoon, students have no way to apply sunscreen and protect themselves, unless by some chance they decided to pack it with them.

This lack of access to sunscreen can be dangerous because a large portion of the student body participates in sports or other activities, spending an extended amount of time in the sun. If students are given the opportunity to apply sunscreen, they would be more likely to do so. Therefore, they would minimize their chances of skin damage as they participate in something they enjoy. The main focus of a game, race, event or practice should be doing one’s best and having fun, not dealing with sunburns.

In past years, in collaboration with IMPACT Melanoma, a nonprofit organization dedicated to the prevention of melanoma, a type of skin cancer usually caused by unprotected sun exposure, several sunscreen dispensers were stationed in convenient locations within Boston’s parks and outdoor spaces. According to former Mayor Marty Walsh in an interview in 2019 with the organization, “This collaboration with IMPACT Melanoma […] is crucial to protecting residents and visitors, and making sure everyone can have fun and stay safe in our parks and public spaces.”

Raising awareness, as well as taking steps to combat the harmful effects of the sun, is crucial to conquering challenges of sunscreen accessibility. Ensuring sunscreen access is the best way to guarantee that people are able to protect themselves.

One way to give students this opportunity would be to make sunscreen available in the nurse’s office, similar to how other commonly needed items like masks and bandaids are. Even though this would not solve the entire sun safety issue, it would give students the chance to protect themselves.

The use of sunscreen provides protection for those who apply it, and everyone deserves to have access to that — whether it be through their own means or at the provision of others. At the end of the day, it allows people to enjoy the warmer weather in a safe and comfortable way.