The Success of Equal Pay for Equal Play 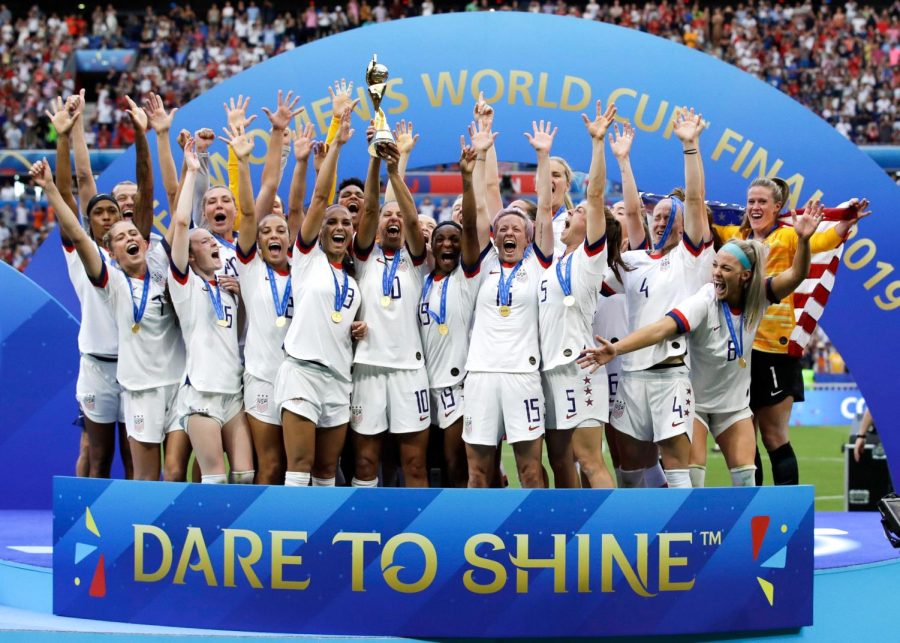 On February 22, an agreement was finally reached between the members of the World Cup-winning United States women’s national soccer team (USWNT) and the United States Soccer Federation (U.S. Soccer). This comes six years after a group of five players on the national team filed an Equal Employment Opportunity Commission complaint about inequality in payment and treatment.

The settlement states that U.S. Soccer will pay men and women at an equal rate for all matches and tournaments, including the World Cup. This group of female athletes will also receive 24 million dollars, with the bulk of that figure being back paid.

The main argument in this lawsuit revolved around equitable treatment of female players; these women asserted that they deserved the same working conditions, such as charter flights, as their male counterparts. This lawsuit’s conditions are monumental, as they promise to bridge the disparity in pay between male and female national team players.

Silvia Guarnotta (I), captain of the Boston Latin School girls’ varsity soccer team, believes this is an amazing accomplishment, saying, “The [USWNT] receiving equal pay is an extremely vital step on the road to achieving this in various aspects of life. I’ve watched this year’s long dispute unfold and the strenuous process the team experienced. This successful fight empowers and inspires all women who struggle with sexism and unfair work environments everywhere.”

Guarnotta also thinks this is an important time for women to continue to come together and advocate for the compensation that they deserve.

Drawing the support of many fellow athletes, celebrities and politicians, this settlement brings hope to other female athletes of different sports. The five women who pushed this lawsuit are proud of this domino effect. Previously, it was decided by a federal judge that these equal pay arguments were invalid, stripping them of legal leverage and exonerating U.S. Soccer from this settlement.

Despite the odds being stacked heavily against them, the women were met with an unexpected but well-deserved victory. Discrimination was addressed, the working conditions settlement was pushed for fair and equal treatment, and U.S. Soccer will give equal pay moving forward.

Anya Bergman (II) is happy about this news but also recognizes the need to maximize the momentum created. She mentions, “Hearing arguments people used to make to justify the inequality are really frustrating, and I am really glad that they are invalidated now. I do hope this goes further than just this team. There are several other teams that deserve this and many other individuals.”

With positive acknowledgments for their accomplishments, some have argued that this case sets the precedent that women must surpass the achievements of men in order to be treated fairly. The national women’s soccer team has won four Fédération Internationale de Football Association Women’s World Cup titles since the competition’s founding, whereas the men’s team placed third in the first World Cup in 1930 and has not come close since.

Such statistics combat the popular arguments supporting different pay rates: that female athletes are not as good as male athletes, that the women’s game is not as exciting as men’s or that female games do not attract as large of an audience or as much money. But, for these reasons, some argue that this case only came out favorable for the female soccer players because they are the best in the world at their sport.

Equality is not contingent upon the number of wins, championships, fans, viewers and performances. Female athletes deserve equality regardless of their performnace compared to male counterparts on the field. Perhaps this gender-based comparison perpetuates the dynamics by which girls and women experience discrimination in the first place.

Caitlin McDonough (III), midfielder for the varsity girls’ soccer team, adds, “While the news of equal pay is an awesome thing for women’s soccer, there are some underlying impacts, both positive and negative. Positively, women finally will get the compensation they rightly deserve as they have been very successful throughout the years. For example, Trinity Rodman signed the largest contract in the National Women’s Soccer League showing that women’s soccer is taking steps in the right direction.”

McDonough was also concerned that the focus in most reports was on the amount of money received and not women’s ability to play. This is often the case when it comes to women in sports. Even for the best female athletes, their hard work and athletic abilities are unnoticed or underappreciated simply because they are women.

As Guarnotta explains, “This is only the start of a hard fight, but younger female soccer players and athletes everywhere are absorbing this news and gaining motivation to fight for equality in their sport.”