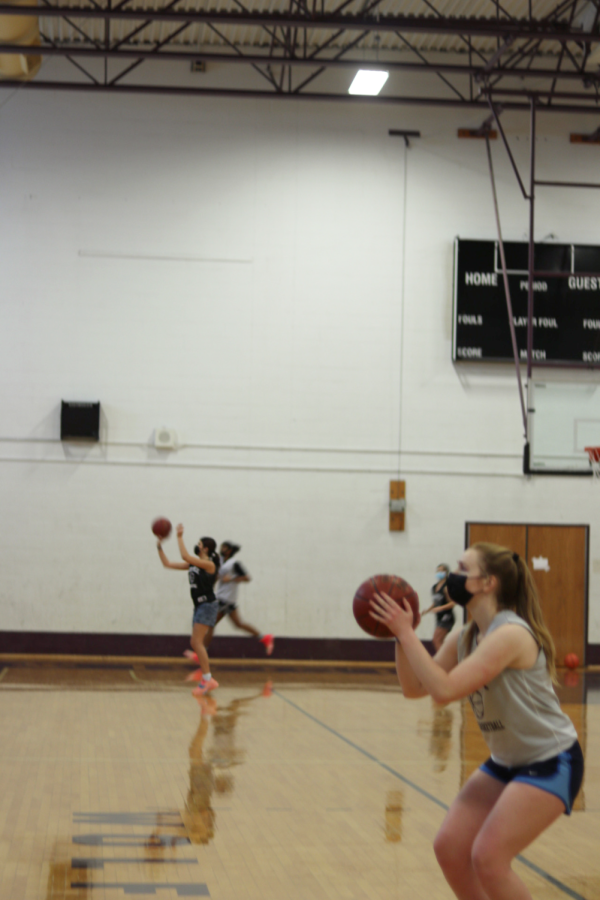 With the rise of the Omicron variant, players gear up with masks. (Source: Regina Chiem (I))

Boston Latin School sports teams were shocked and disappointed when they heard their seasons had been canceled. Right before winter break, the news broke that Boston Public Schools postponed the winter sports season until January 10, a postponement that had been in contemplation for a while. Prior to the decision, BPS had already banned spectators from home games, and sports teams were struggling with the rise of COVID-19 cases among their student-athletes.

Many sports teams struggled with a lack of attendance due to Omicron variant cases increasing dramatically in the week before winter break. By December 22,  2021 there were already 36 new positive cases of COVID-19 in the BLS community alone, the majority having tested positive that day. This was evidence enough to postpone the reopening of sports until over a week after the end of winter break for fear of spreading the virus further.

Many athletes did not see eye-to-eye with the assertion that winter sports were inherently unsafe and called out other more “high-risk” situations that were not being addressed. “Right after the shutdown happened and we all went on break, a couple [of] kids got [COVID-19], I think from seeing their families,” says Sam Griffin (II), a captain of the boys’ basketball team.

It was clear from conversations with other student-athletes that a lot of cases have spread, not through school nor sports, but rather through large unmasked gatherings with friends and family over the holidays. All BLS sports had to follow the same safety rules that students follow in school. Griffin confirms this effort, explaining, “I thought we were doing really well with keeping our masks on and staying distanced from each other when we weren’t playing.” It was clear that student-athletes were contracting COVID-19, however, and cases were only rising.

Other student-athletes, though they agreed with the decision to pause the season, still felt a negative impact on their overall well-being. Jill Keane (II), a captain of the cheer team, felt the impact on her routine and mental well-being because “it just felt weird not going to cheer every day.” She further explains that she truly “missed seeing [her] team.”

For many, their sports are a big part of out-of-school life and are important for a variety of reasons. Exercise is an important tool for bettering mental health, and the social aspect of team sports allows athletes to be a part of a supportive community, which is especially important during the stress of the pandemic.

This imbalance between physical safety and mental well-being has affected the sports community more than any other group at BLS over the course of the past few weeks. William Hu (I), a captain of the crew team and the founder of a petition for a virtual learning option with over 9,000 signatures, comments on this difficult balance: “I’m a crew captain myself, you know. I want to go to crew every single day of the week, and this week I’m not going, specifically just to let things peak off.”  Though sports mean a lot to him, Hu realizes that going back during the height of the virus is not in the best interest for the health of him and his family.

Ultimately, after extending the pause on winter sports beyond January 10, BPS made the decision to finally resume its athletics in small groups, starting January 18. Required pool testing, among other measures, will hopefully keep the spread of cases minimal and allow athletes to safely return to their sports. Massachusetts appears to have passed the peak of the Omicron variant, but there is still much uncertainty for what is to come. No matter how the virus affects our athletes, they will continue to be resilient and enter back into the Dual County League that has continued without them for more than three weeks. As Griffin concludes, every team is “going to have to fight our way back even more than we did before.”