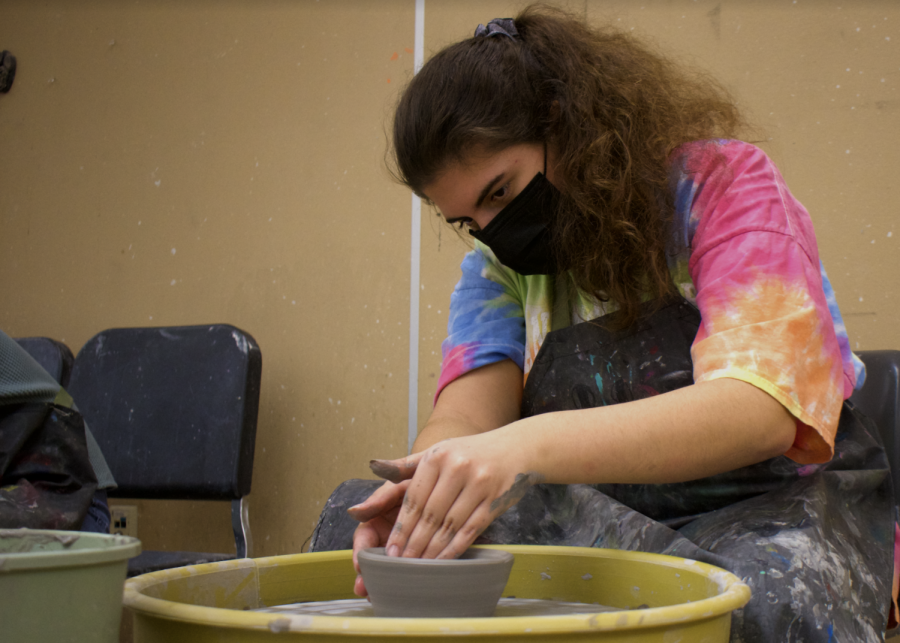 Michalena Capogreco (II) hones her pottery skills on the wheel.

Boston Latin School’s Ceramics and Visual Arts program has been around for some time, but it is getting a fresh start after the return to in-person school. The program welcomes students of all grade levels and artistic backgrounds to learn about various art media.

The program began approximately 10 years ago, with alumna Katelin Jolly’s (‘01) desire for students to use the pottery wheels in the art wing. Jolly offered to teach students how to use the wheels, which developed into an after-school arts program that has been running ever since. She led the club for a year before Foundations in Visual Arts and AP Studio Arts teacher Mr. Stephen Harris began offering the leadership position to his student teachers each year.

With the return to in-person school, Mr. Harris has been facilitating the program, which meets from 2:30 to 4:30 P.M. in Room 518 every Thursday. This year marks the most students it has ever seen, with 20 to 22 students at each meeting, in comparison with the previous years’ estimate of eight attendees.

Greta Grygalis (I) reflects on the amiable nature of the club’s community. She says, “On my first day of using the pottery wheel, the people I sat next to were friendly and [helped] me with tips, as well as being supportive.”

Not only is the club a way to relax and make friends, it also provides guidance for students’ art. Yasamin Kiani (II) says that the program has benefited her because she now has “a space where [she] can practice [her] art and learn pottery and ceramics as a beginner.” With Mr. Harris’s experience and a friendly community, the program can inform and guide students from any art background. It has also begun to incorporate other arts, widening its subject area beyond pottery.

Mr. Harris’s favorite part of managing the classes has been diversifying them to include more art forms than just ceramics. The program was formerly called the “Clay Club,” and although the alliteration was appealing, the name did not account for the other media that are now part of the Ceramics and Visual Arts Program.

Although most students come in for help with operating the pottery wheels, Mr. Harris looks forward to initiating projects in other areas, and he hopes for students to have a say in the type of art they do. Mr. Harris says, “No two days should be the same,” expressing his desire to expand the program’s focus beyond pottery. With these changes, the classes may be able to serve as a supplement for those unable to take art classes during the school day.

The future of this program is looking bright. Due to the recent increase in enrollment, Mr. Harris says that another day may be added to the program, so that more students will have access to the tools and guidance of the Ceramics and Visual Arts Progra