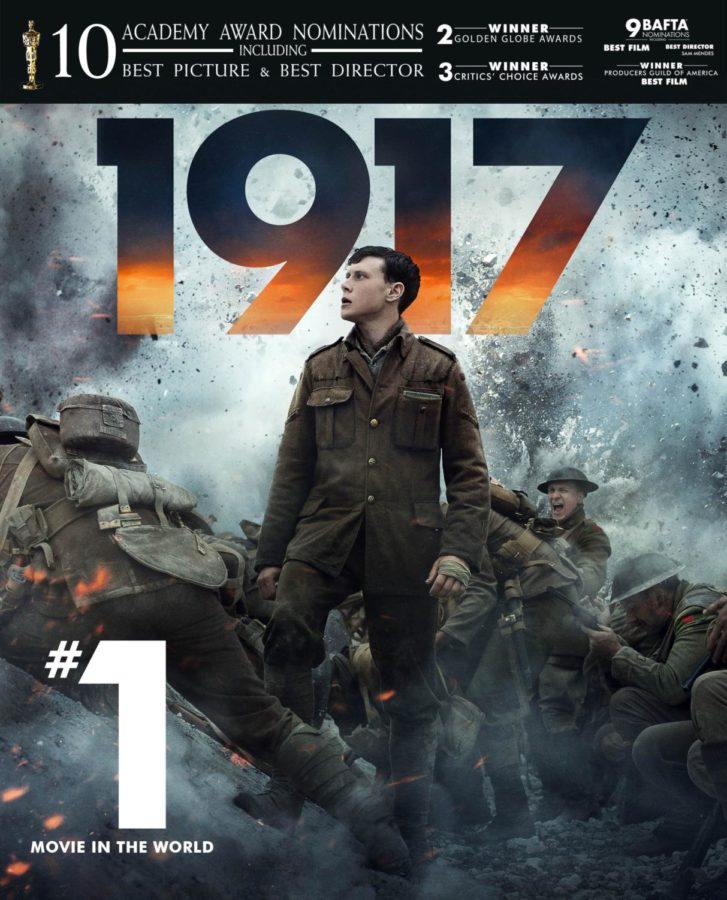 1917, a war and drama movie, continues to receive awards a year after its release.

1917 (2019), directed by Sam Mendes, is a film nominated by the Academy of Motion Picture Arts and Sciences for the Academy Award for Best Picture. The Boston Latin School community was asked to rate the screenplay, the acting, the music and the movie overall out of five stars. After calculating the averages of the responses and rounding the data to the nearest tenth, the movie’s results and comments are shown below.

Disclaimer: 1917 is rated R for “violence, some disturbing images, and language,” according to the Motion Picture Association.

I loved the way it was shot
The movie 1917 is a movie that I would not watch again just because it is made by the camera movements and over all screenplay. Many people could call it boring but the point of it was not to have an a similar arc to that of most movies now, but I still think that it was entertaining to both watch and think about later on.
I really liked the one shot narrative as it showed the inescapably of war. There were many scenes that seemed begging for cuts but the fact that none came really seared into my mind the understanding that actual people fought in war lol
While the story was relatively generic (yet enjoyable) in terms of war movies, what made it stand apart from other (war) movies was the videography of the film, in that it was made to look like it was done all in one long continuous take. The blending of shots with both hidden hard and CG cuts made it appear to have been shot all in one take, which I greatly appreciated. I think that’s what is meant to stand out about 1917: not the story, but instead the way it’s presented.
Such an emotional rollercoaster
I like how it was not only centered around the soldiers of war but also the victims of war. 1917 demonstrates the loss of family life and emphasizes the humanness of the many cold corpses of war and even the enemies.
The movie’s cinematography at times reminds me of almost like a theatrical play instead of a movie, personally not my cup of tea.
I liked all of the suspense that led up to the various dramatic scenes in the moving. It made me somewhat anxious about what would happen next.
I wasn’t sure if I would actually enjoy a war movie, but I was pleasantly surprised by 1917. I definitely understand why it got so much critical acclaim. The cinematography was absolutely stunning.
One of the best war movies ever made. It stood apart from all the rest by the camera work with shots that continued for very long segments without breaks which made the film more real and palpable. A great war movie!
I liked how the movie seemed like it was in one take.