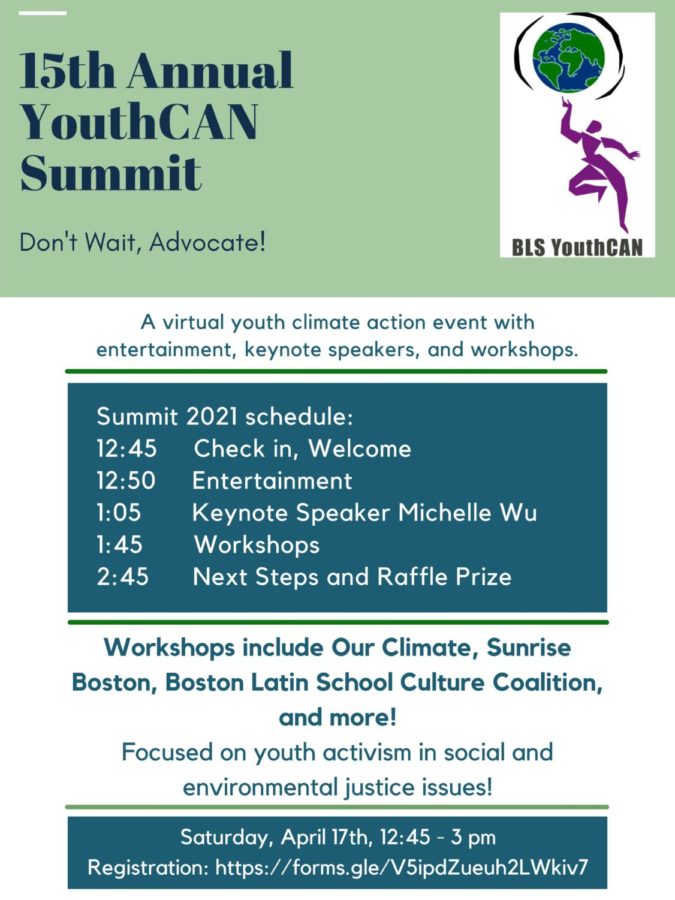 YouthCan has their 15th annual summit with keynote speaker Michelle Wu. (Photo by: Zoe Nagasawa (I))

As the largest YouthCAN event of the year, the Summit provides an avenue for BLS students to advocate for the environment. The theme of this year’s Summit was “Don’t Wait, Advocate!” The climate-focused event highlighted a variety of notable figures and groups throughout the schoolwide and citywide community, hosting Boston City Councilor At-Large Michelle Wu as a keynote speaker, workshops led by various climate advocacy organizations, performances from the BLS Gospel Choir, the American Ink student band and a spoken piece delivered by Izzy Goodrich (I).

Planning for the Summit each year begins in January, as YouthCAN works to formulate a unique theme for the event. From there, the club gradually starts reaching out to local organizations, specifically those which they feel would be a good fit for the year’s theme. In addition, during in-person years, numerous companies, clubs and activists are invited to host interactive booths at the event for students to engage with. As the preparation process concludes, YouthCAN spends time promoting the event throughout the schoolwide community to ensure an active and engaged audience at the Summit.

When asked about the interactive nature of the in-person Summit, YouthCAN member Dalilah Mostoslavsky (I) states, “We usually have a lot of fun stands with activities that people can go and learn about different things, like a stand with a bike-powered smoothie maker or a table with simple science experiments.”

In light of the COVID-19 pandemic, however, YouthCAN was forced to redesign the event to function within a remote capacity. As opposed to a six-hour-long in-person event, this year’s virtual Summit lasted only two hours, with the first half being completely devoted to entertainment performances and the keynote speaker. These performances were meant to keep students engaged, which YouthCAN understood to be a challenge in a remote setting. The second hour of the event was more traditional, as attendees were given the option to choose breakout room workshops of their interest.

Wu was chosen to present at the Summit due to her vocal support of the Green New Deal, a legislative proposal that calls for public policy against climate change, throughout her time as City Councilor. This year’s presentation from Wu was the culmination of several years’ worth of efforts by YouthCAN to reach out to her. In fact, Wu had been booked for the 2020 Climate Summit before it had been canceled due to the pandemic.

Despite the challenges associated with a virtual Summit, a unique benefit of this year’s event was the “action plan” which each workshop initiated for their audience. Organizations were able to incorporate several tasks for their participants to accomplish regarding legislative climate advocacy, which the attendees could then immediately complete online. This process allowed for increased engagement in lobbying against environmental degradation and climate injustice in Massachusetts.

Climate change is one of the core issues which YouthCAN seeks to address. Each year, the Summit serves as a way to share their passion with their school and city. The club takes pride in inspiring people to take action within their everyday lives.

YouthCAN President Zoe Nagasawa (I) states, “A lot of us come from privileged enough backgrounds that environmental justice isn’t affecting us directly, but it’s exactly because of that that we need to be a part of this fight and continue to fight for environmental justice.”