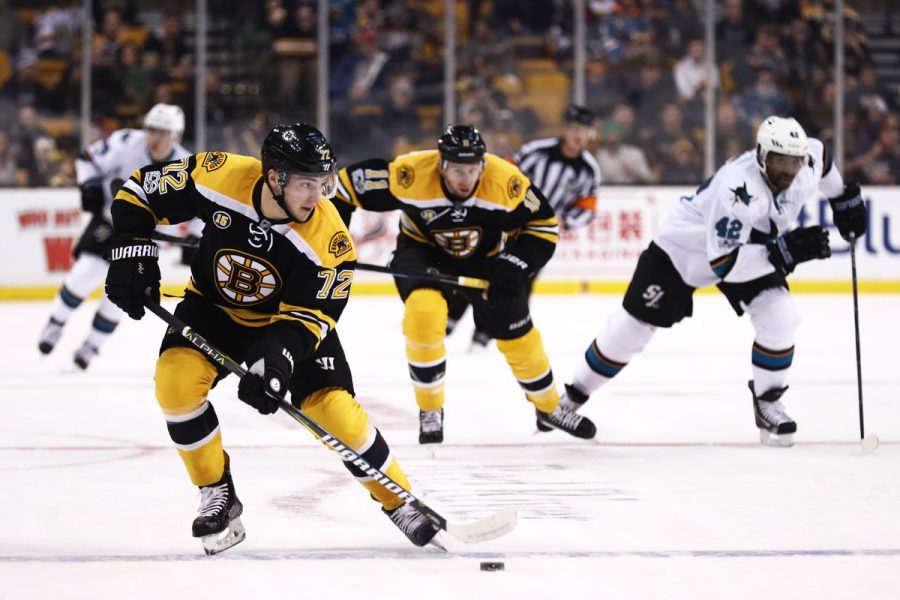 Bruins plays the Sharks in a hockey game.

When the country began shutting down because of the COVID-19 pandemic, the NHL, along with other professional sports leagues, had to postpone its season temporarily. Since the NHL earns a majority of their revenue from ticket sales and concessions, the shutdown of stadiums took a hit to the wallets of team owners.

After the hockey season was shut down, the players agreed to return one of their paychecks to the NHL to help aid the financial instabilities caused by COVID-19. This deal was enacted because it was unclear at the time whether the season would resume at all. The players’ contracts, however, guarantee that they receive a salary, regardless of the season’s conditions. Nonetheless, the players agreed to receive a heavily reduced paycheck since the season was cancelled.

Once the NHL restarted with extra precautionary measures, they began discussing what the continuation of the upcoming season would look like. The players were told that if they wanted to play, they would have to leave their families and live in a hotel without leaving the premises. Ken Campbell from The Hockey News says, “They agreed to spend up to two months away from their families in a bubble without being paid for it.”

As the beginning of the NHL season on January 1 inches closer, the season is starting to look more unpredictable. The issue lies within the differing interpretations of two different contracts:  the Collective Bargaining Agreement (CBA) and the Memorandum of Understanding. The CBA sets out the terms and conditions between the NHL and their athletes, and the Memorandum of Understanding confirms that both parties have agreed to and understood what is outlined in the agreement.

Last summer the NHL and NHLPA extended the CBA by four years. The NHL reportedly requested an increase from a ten percent salary deferral to 26 percent and a 25 percent salary escrow of the players. The players were incredibly upset by this new solicitation. In signing the contract, the players believed that the uncertainties regarding COVID-19 would not affect their salaries so severely.

The NHL, however, wants less money in the pockets of their players, and more into their own. Paragraph 17 of the Standard Players’ Contract states, “If because of any condition arising from a state of war or other cause beyond the control of the League or of the Club, the players’ salaries will be replaced under the reduction of operations,” meaning that with only some games being played as well as no fans in attendance, the players should be entitled to a replacement of their original salaries.

The League waived this agreement, arguing that COVID-19 and its subsequent lockdown was not in the League’s control. In reality, the virus has already had a very strong effect on the U.S. and Canada, and the League knew the effect it would have on the upcoming season. The dispute has caused emotions to run high from both the NHL players and the League alike.

Helen Drew, a sports lawyer at the University of Buffalo, explains this situation: “The bottom line is they are in it together; the owners and the players have to make this work on whatever terms will get people through.”