Is Tom Brady Our Hero or a Traitor? 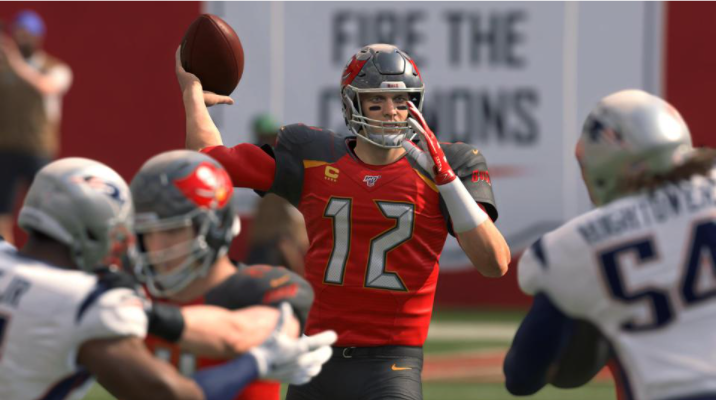 After playing for the Patriots for 20 years, Tom Brady gets traded to the Buccaneers.

Earlier this year in March, Tom Brady made the big announcement of leaving the New England Patriots. In addition to the New England fan base, the entire country was also talking about it. The instant reactions of many people were betrayal or shock, but as initial emotions dwindled, perspectives began to change and opinions became divided. Many Patriots fans expected to see Tom Brady continue his legacy with the Patriots until the end of his career.

Despite this unexpected shift in Brady’s professional career, there is still plenty to respect and acknowledge him for. In his 20 years playing for the Patriots, he led the team to six super bowl championships and was named the Most Valuable Player of the super bowl four times.

His tenacity, intelligent playmaking abilities, and remarkable sense of leadership are all reasons many fans love him, as well as why he is a role model for aspiring young athletes. Many think he is a very large factor in bringing the New England Patriots such widespread fame and fortune, in addition to one of the best fanbases in the NFL.

For example, Colleen Lombard (IV) says, “I think he was a great leader; he seemed to have a really good relationship with all the players. He also always talked about eating healthy and staying fit”.

Tom Brady has also raised and donated a lot of money to charities across the globe. Over the past 20 years, he has raised $46.5 million for Best Buddies International, a non-profit organization dedicated to assisting those with both intellectual and developmental disabilities due to being isolated from the rest of the world.

In December of 2019, Brady took up the role of becoming a global ambassador for this organization, not only raising money, but also attending events and meeting new people on account of Best Buddies.

In addition to this, Brady is a huge activist for reducing poverty in Africa. He took a trip to Ghana and Uganda in effort to relieve poverty and is a big participant in the Make a Wish Foundation.

Brady’s own TB12 Foundation serves to empower athletes everywhere to keep going despite the odds. He has used and is still using his platform to give back and make a difference in many lives.

While many may still be upset that he has left the New England Patriots, he has a right to his own decision. Obviously it was not an easy one to make and was not taken lightly by anyone, least of all his teammates and coaches. Brady was very emotional when relaying the news to Head Coach Bill Belicheck and franchise owner Robert Kraft, but he ultimately decided that moving on and starting over with a new team was something he needed to do. It is upsetting to us New Englanders that the Greatest Of All Time (GOAT) of football is leaving his beloved home and team.

But as those who support and love Tom Brady, we need to respect that he has made his decision, and wish him the best of luck as he moves forward in his life. Maybe some of us will even be cheering him on as he plays for the Tampa Bay Buccaneers. However, to those who do, be sure to do it silently, or else you will be the newly deemed bandwagoners!

Tom Brady is a Traitor

Tom Brady’s name will forever be associated with the Patriot’s legacy. The New England Patriots took a chance at drafting him, and he went from a skinny and slow-footed backup quarterback to one of the most well respected ones in football history.However, he did not get there on his own. He was supported by the Patriots organization that, year after year, was able to recruit, draft, or trade for high-level players on defense, offensive line, running backs, and receivers that enabled Brady to succeed.

When he made the shocking announcement that he was going to abandon the team he’d surrounded his entire career around, he not only betrayed his teammates, coaches, and organization, but he also betrayed the entire New England fanbase.

Christine Maher (IV) in particular feels that “New England was the only team Tom knew for 20 years, and I grew up watching him every Sunday and even bought his jersey. Fans were emotionally attached to Tom, and he left with no notice”.

Brady’s actions and accomplishments can portray him as a hero, but this doesn’t diminish the fact that he is also a traitor. With his 6 superbowl titles, 4 Super Bowl MVPs, and 54 total NFL records, he instilled an immense amount of hope in all of New England, leaving the Patriots crushed by this decision.

In the past, football fans have either loved or despised Brady and the Patriots, and he went synonymously with his team. In retrospect, the Patriots went with him, so when Brady decided to leave New England and go to Tampa Bay, this was a decisive act of betrayal.

His switch of teams also brings up the question of why he did this. From a fan’s perspective, Brady was in a relatively ideal situation. He’d formed a long and well-built relationship with his coach, played on the same team for two decades, had a dedicated fanbase, and had the potential to comfortably end his career as the GOAT. He didn’t need the money, as he is already married to one of the wealthiest and famous supermodels ever.

Brady explained that he wanted a new challenge and didn’t feel like the Patriots were giving him the authority and respect he deserved, but fixing this didn’t require leaving the Patriots. Robert Craft explained that, “If he wanted to be here, we would have put a deal together,” but rather than addressing and facing his problems, he decided to be selfish and simply leave them.

Responding to his choice to leave, Brady said, “I never cared about a legacy… So, why would I choose a different place? It’s just time. I don’t know what to say other than that.” He admitted that the legacy didn’t matter. He cared more about his own career, disregarding the franchise he built and the franchise that built him.

Now, of course, Brady has the right to his own decisions, but that doesn’t mean his choices don’t signify betrayal. Contributing to a team for 20 years and then deserting it at the very end of one’s career is a tease of epic proportions.

The New England Patriots were his family, and nothing should have changed that. His decision was a slap in the face to the fans that loved him, the team that gave him a chance, the coaches that developed his game, and to the organization that made him the greatest quarterback of all time.